We’re back with our first Women In Software Engineering virtual event of the new year!

With technical talks and demo’s discussing everything from how to successfully operate 100’s of satellites using agile aerospace, automation and Python, to mobile apps testing with Java and Kotlin, this was not an event to be missed.

We were delighted to be joined by our two fantastic speakers, Kattia Flores Pozo, Engineering Manager, Space Operations at Planet and Syeda Mehak Zahra, Software Engineer at ADVA.

Kattia kicked off the event by speaking about how Planet successfully operates 100’s of satellites using agile aerospace.

In order to download the images that the satellites are taking, Kattia highlights the need for a Global Ground Station Network: antennas that will talk to the satellites telling them what to do. Mission control optimises the resources on the ground. Once the data has been downloaded, it then needs to be stored, analysed and processed ready for the customers. All of which is automated.

Agile aerospace is a philosophy of spacecraft development that encourages rapid iteration, on both hardware and software. Continuously improving what is flying into space. To emphasise the pace at which agile aerospace occurs, Kattia mentions that in the last year alone Planet launched 5 different rockets; one of which had 26 satellites. Their global ground station network also received over 5 petabytes of data.

For the second talk of the evening, Software Engineer at ADVA, Syeda Mehak Zahra provided an introduction into mobile application development in Android.

Android is an open platform for mobile development, providing a complete stack for Middleware applications. Powered by Linux operating system.

Syeda goes on to highlight and explain the 4 basic building blocks for Android:

To hear Syeda talk about the steps to mobile application development, watch the full video here!

Thank you to both Kattia and Syeda for speaking at the event and making it such a success and thank you to everyone who attended; we are already in the process of planning an exciting event in celebration of International Women’s Day – stay tuned!

The aim of these meetups is to provide a platform for women working in engineering and cloud to share their knowledge, tell their stories and offer advice on the journey to success. If you are interested in speaking at, or attending, our next event don’t hesitate to get in touch!

Top Women In Tech Podcasts for 2021 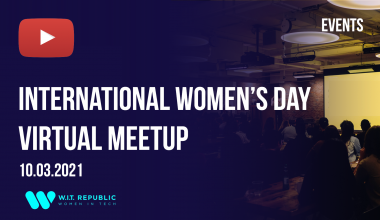 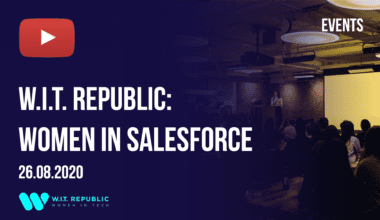 Read More
We recently hosted our first W.I.T. Republic: Women In Salesforce virtual event. These meetups provide a platform for…